#75Words Heard Across the World 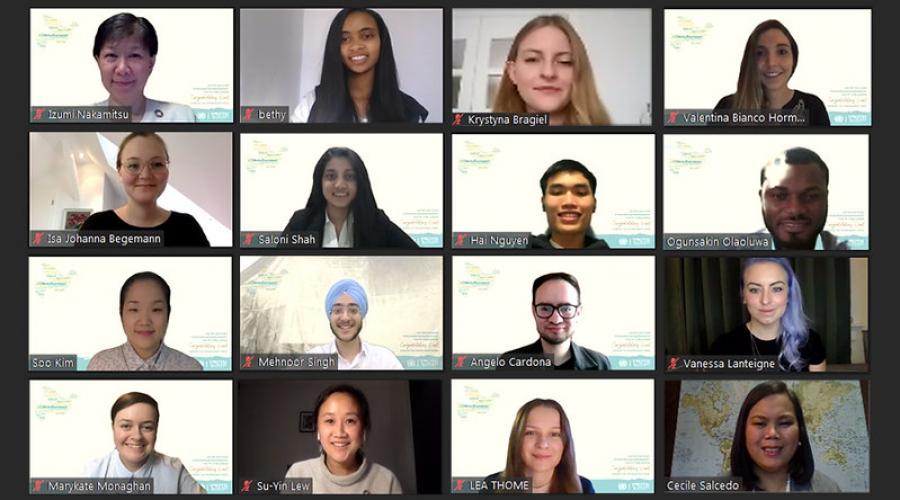 The winners of the UN #75Words4Disarmament Youth Contest share comments with the High Representative for Disarmament Affairs after the event.

This year has shifted many of our lives into virtual reality. Handshakes have been replaced with emails, friendly catch-ups with cyber get-togethers, and traditional in-person exchanges with a procession of online activities.

This new virtual world can feel overwhelmingly isolating at times, but another side of it emerged when the #Youth4Disarmament initiative recently celebrated the winners of its #75Words4Disarmament Youth Challenge. On 26 October, young people from around the world came together to share their thoughts and feelings about a common goal—disarmament.

When I joined the United Nations Office for Disarmament Affairs as an intern this September, our meetings were abuzz with preparation for this contest. I quickly learned why: it invited young people from around the world to share what disarmament means to them and their communities in 75 words, in commemoration of the seventy fifth anniversaries of the founding of the United Nations and the atomic bombings of Hiroshima and Nagasaki. The idea was to encourage participants to think about disarmament not as an abstract concept, but as a practical way to help prevent armed conflict and promote peace and security.

Working on the Youth Challenge was a tremendously inspiring and encouraging experience. I had the honour of helping to choose finalists for consideration by our judging panel, getting a sneak peek at the fantastic applications we received from every corner of the world—a total of 198 entries from 62 countries.

Each of these 75-word submissions revealed new facets of the word “disarmament” that echoed the thoughts, passions and inspiration of its author. Each entry rang with its own voice that tapped into our imaginations, engaging and empowering us both intellectually and emotionally.

As the High Representative for Disarmament Affairs, Ms. Izumi Nakamitsu, said in her opening remarks at the #75Words4Disarmament Youth Challenge Congratulatory Event:

“There is a quote that says, “Art is not a thing – but a way.” The sentiments offered by the young winners today are, in a very real sense, a form of art. They help point the way to disarmament.”

To announce the winning submissions, the #Youth4Disarmament initiative held the #75Words4Disarmament Youth Challenge Congratulatory Event in late October, marking Disarmament Week. The event had an array of distinguished speakers: Ms. Izumi Nakamitsu, United Nations Under-Secretary-General and High Representative for Disarmament Affairs; H.E. Mr. Agustin Santos Maraver of Spain, Chair of the First Committee; H.E. Mr. Cho Hyun, Permanent Representative of the Republic of Korea to the United Nations; and Ms. Isa Begemann, United Nations Youth Champion for Disarmament. The first-prize winners—Bethlehem Beyoro from the 13-18 age group, Krystyna Brągiel from the 19-24 age group, and Valentina Bianco Hormaechea from the 25-29 age group—also spoke in video messages during the event, discussing both their experiences as participants in the Youth Challenge and the inspirations behind their submissions. Following their remarks, excerpts from all of the winning submissions were showcased in a video presentation.

I co-hosted the event with my colleague, Su-Yin Lew, giving us both a fantastic opportunity to celebrate and share the inspiring submissions with attendees. By posting the winning entries on our Instagram page throughout Disarmament Week and showcasing them on the newly launched #Youth4Disarmament website, we could invite even more young people to hear, engage and learn from different perspectives. Sometimes our virtual reality has its advantages.

Remarkably, the Congratulatory Event’s participants and speakers joined us from nearly every time zone; I connected from the United Kingdom, Su-Yin from Australia, and our guest speakers from New York and Germany. The first-prize winners—Bethlehem from Ethiopia, Krystyna from Poland, and Valentina from Argentina—each shared their winning entries in videos they had recorded in their countries of residence. The international setting reflected the contest’s ability not only to engage youth from all around the world, but to do so during a time of isolation for many.

We organized a special photo opportunity after the event with the 15 winners and the High Representative, who encouraged the young winners to continue their great work.

The UN #75Words4Disarmament Youth Challenge and Congratulatory Event engaged, empowered and educated its participants, attendees and organizers. As one of the winners told me by email after the event, “Let’s keep changing the world, together.”

To hear the winning submissions yourself, please visit our dedicated page.

You can also check out photos from the Congratulatory Event and previous #Youth4Disarmament activities here.