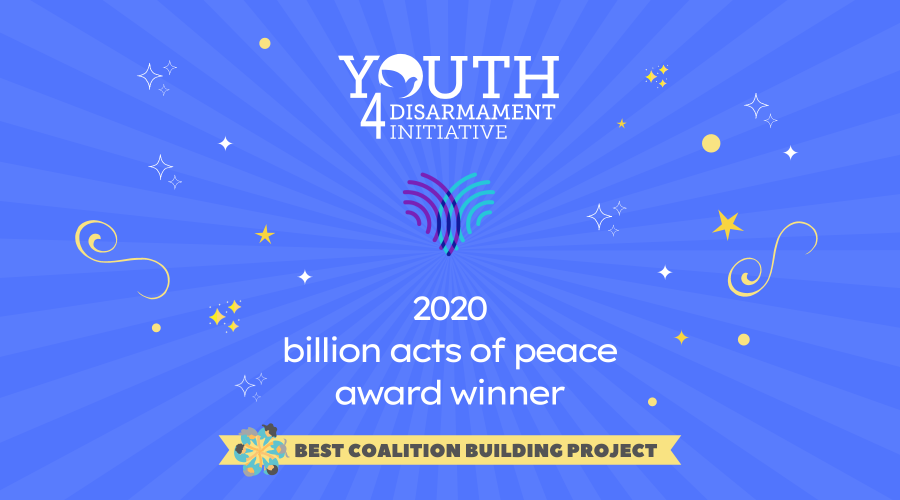 The #Youth4Disarmament initiative has been recognized as Best Coalition Building Project of 2020 by a Billion Acts of Peace. The initiative was nominated along with eleven other inspiring projects, chosen from more than eight million Acts for Peace.

Billion Acts of Peace, an initiative of the PeaceJam Foundation, is a global movement led by fourteen Nobel Peace Prize Winners and youth around the world with the ambitious goal of creating One Billion Acts of Peace by 2021, and in doing so, inspiring everyday people to change the world – one Act of Peace at a time. Among those who could vote for the nominated Acts were previous winners, which include climate change youth advocate Greta Thunberg.

#Youth4Disarmament is an outreach initiative established in 2019 by the United Nations Office for Disarmament Affairs to engage, educate and empower young people in the field of disarmament and non-proliferation.

“This is a great recognition that youth leadership and action are both inspiring and critical to ensuring our collective peace and security,” says Under-Secretary-General and High Representative for Disarmament Affairs Ms. Izumi Nakamitsu. She adds: “Young people, the largest generation in history, have a critical role to play in raising awareness and developing new approaches to bring about change to reduce threats from weapons of mass destruction and conventional arms, including their proliferation.”

The project connects geographically diverse young people with experts to learn about current international security challenges, the work of the United Nations and how to actively participate. Recognized as the Best Coalition Building Project, the initiative has deployed various activities to engage, educate and empower youth in the field of disarmament.

Under its current flagship project, made possible with generous financial support from the Government of Germany, ten eclectic Youth Champions for Disarmament with diverse backgrounds and perspectives, are participating in a series of informative webinars and discussions, meant to inspire their own plans on how to engage in their communities on issues related to disarmament, non-proliferation and arms control.

Recently, the Youth Champions joined the Northeast Asia Youth Steering Committee, a group supported by UNODA and the Department of Political and Peacebuilding Affairs (DPPA), at the United Nations-Republic of Korea Joint Conference on Disarmament and Non‑Proliferation Issues. In the annual meeting’s first-ever special youth session, the youth representatives shared their views, perspectives and concerns about the impact of new technologies on peace and security.

The award ceremony coincided with a range of milestones that have both advanced the role of young people in international peace and security, and opened opportunities for youth to make meaningful contributions within the area of disarmament. This includes the five-year anniversary of the adoption of United Nations Security Council resolution 2250 on Youth, Peace and Security, and resolution 74/64 on Youth, Disarmament and Non-Proliferation, adopted by the General Assembly last year.

“For me, disarmament is not just about taking away weapons from someone,” says Bethlehem Beyoro from Ethiopia. She joined the #75Words4Disarmament Youth Challenge last Summer, which invited young people to express what disarmament means to them and their communities in seventy-five words. “It is also about working on the mind of that person, so that he or she believes that the usage of arms to establish their ideology, interest, religion, or power is wrong”, Bethlehem wrote in her winning submission.

Through its newly launched, dedicated online platform, the #Youth4Disarmament initiative will continue to build fruitful coalitions to empower young people to make their contribution to disarmament and sustaining peace, as national and world citizens.