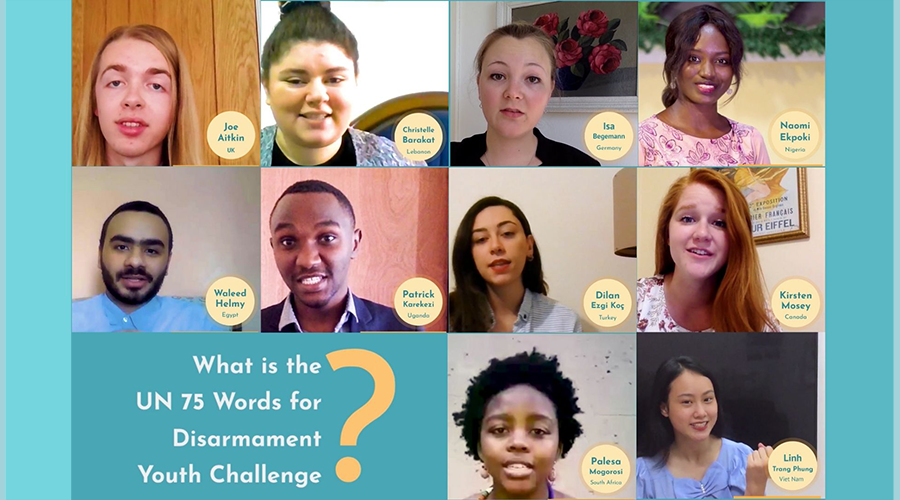 The Youth Champions for Disarmament encourage young people aged 13 to 29 to take the challenge.
New York

Words have power.  Through words we express our beliefs, share our unique experiences and perceptions and bring about change.  The “75 Words for Disarmament Youth Challenge” invites young people around the world to express what disarmament means to them and their communities in 75 words.  The challenge provides an opportunity to think about disarmament not as an abstract concept, but as a practical means to help prevent armed conflict and promote peace and security.

The “75 Words for Disarmament Youth Challenge” is open to young people between the ages of 13 and 29.  Submissions will be welcomed in the following three age groups:  13 to 18 years (middle and high school), 19 to 24 years (college and graduate school) and 25 to 29 years (early career professionals).  The five winners from each group will be invited to read their entries in self‑recorded videos that will be featured on and widely disseminated and shared through the Office for Disarmament Affairs’ websites and social media during Disarmament Week, which is celebrated annually from 24 to 30 October.

The “75 Words for Disarmament Youth Challenge” launches on 12 August — International Youth Day — which this year is celebrated under the theme “Youth Engagement for Global Action”.  The campaign will close on 26 September, which marks the International Day for the Total Elimination of Nuclear Weapons.