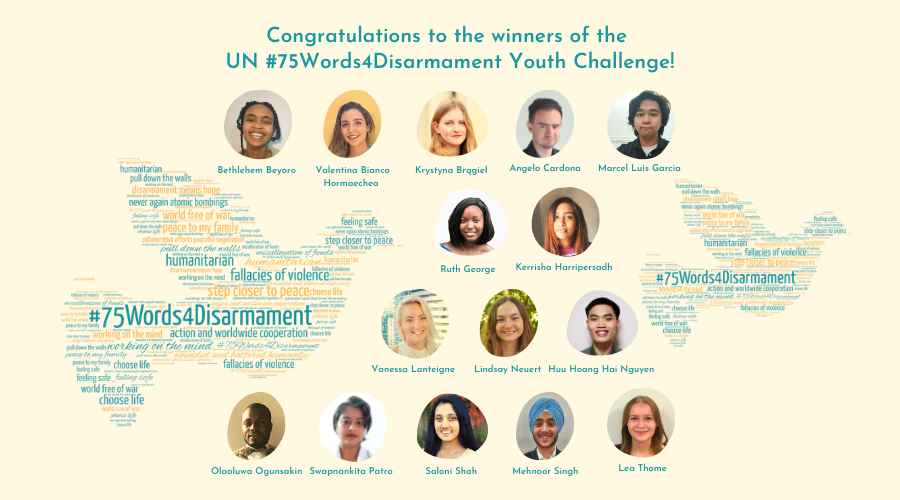 Disarmament is at the heart of the collective security system set out in the United Nations Charter, with its goal to “save succeeding generations from the scourge of war”.  In commemoration of the seventy-fifth anniversaries of the establishment of the United Nations and the atomic bombings of Hiroshima and Nagasaki, the Office for Disarmament Affairs held the “75 Words for Disarmament Youth Challenge”, which was launched on 12 August, International Youth Day, and was closed on 26 September, the International Day for the Total Elimination of Nuclear Weapons. The challenge was open to young people between the ages of 13 and 29, with three age groups:  13 to 18 years (middle and high school), 19 to 24 years (college and graduate school) and 25 to 29 years (early career professionals).

Through the challenge, young people around the world were invited to express what disarmament means to them and their communities in 75 words. A total of 198 entries were received from 62 countries.

The following were the members of the panel of judges:

The Office for Disarmament Affairs is pleased to announce the winners, listed below. Their entries will be featured here and in our social media accounts throughout the coming days, as we mark Disarmament Week. Every day until 30 October, we will post 3 winning entries, starting with those of the First Prize winners.

For me, disarmament isn’t just about taking away weapons from someone, its also about working on the mind of that person so that he/she believes that the usage of arms to establish his/her ideology, interest, religion or power is wrong. It means creating a global framework that is strong enough to address the frustration of people before they take violent measures and punish whoever is to blame when wrong things are done, free from partisanship.

It’s a miracle that we’ve avoided another nuclear war after the first use of an atomic bomb 75 years ago. Rising tensions due to modernization of weapons, political mistrust, lack of diplomacy, and increasing nationalism make the 13,890 nuclear weapons existing globally an existential threat to humanity. Nuclear disarmament is critical since nuclear war is neither winnable nor survivable. On humanitarian grounds, we deserve a peaceful coexistence without a mushroom cloud hanging over us.

An acknowledgement of historical failures.
A recognition of the fallacies of violence,
and an opportunity to make amends.
Because, really, should we engage in constant turmoil,
carry on ignorant, have death and destruction run free?
Or should we establish a new beginning,
one based on the tenets of diplomacy?
It’s simple, choose the latter.
Now, let down your guard and open your arms.
Awoke with a different start.
For this is not who we are.

To me, disarmament means one step closer to peace. Disarmament means to reduce, control and eventually eliminate any and all military arms, and especially, nuclear weapons. For this to occur, formal meetings, policies and treaties would need to take place for a global consensus and agreement. Disarmament would reduce the feeling of uncertainty and fear regarding weapons, mass destruction and war. This would be the best possible protection against the harmful dangers of nuclear weapons.

When we hear the word disarmament, we think of missiles and nuclear weapons. But we need to change that, disarmament to me, means disarming the society of all the inequality, racial discrimination, war, poverty, hunger; the list can go on and on. What we need are not empty words but action and worldwide cooperation to disarm and use this opportunity to turn it into reality.

Disarmament invites us to pull down the walls, break the barriers. It allows us to see other people as human beings, not targets or enemies. Disarmament brings relief, understanding, respect and dignity. It is a chance for a deeper reflection on the value of human life and health. A chance of survival for all beings inhabiting our planet. It is a dream which can and should become a reality. Disarmament—it is our common responsibility.

Disarmament is the deliberate choice for peace of a wounded and battered humanity. It’s the avoidance of hate, and the proliferation of the weapons of hate, in a world where the cost of daily bread is dear. It is the willing motivation of free individuals to broker a world of peace and inclusivity, where resources are used in fashioning tools of comfort and technological development in infrastructure, rather than for the dastardly ends of warfare.

Disarmament means hope for the generations to come. It means the reallocation of military spending towards the achievement of the sustainability development goals. It means that we will never experience again the great pain of the atomic bombings of Hiroshima and Nagasaki. It means lasting peace for humanity.

Nuclear weapons and deterrence being indispensable is a long-held myth. As a young leader in my community, I know that the way towards a safer, peaceful world is working towards disarmament. As we see more states divert away from international cooperation, it is upon my generation to actively advocate for a world free of war and conflict. Disarmament is a tool that will lead us towards this world.

Disarmament means reclaiming public funds for the public instead of war profiteers. In my country, nearly 10% of our taxes go to the defense budget, yet what are the threats that the military secures us from? We are surrounded by homelessness, mental illness, addiction, and climate disasters, which put our security at risk, every day. No country threatens us except our own with a misallocation of funds to limitless weapons stocks instead of generalized future prosperity.

To me disarmament is the moral duty of the countries for reducing, limiting, or abolishing weapons of mass destruction, including nuclear arms. Disarmament can contribute to building peace, as the processes offer an important chance for transformation towards a more peaceful world order and less violent ways of resolving conflicts. The present world needs collaborative efforts and peaceful negotiation rather than weapons to save the human civilization and the global eco-system.