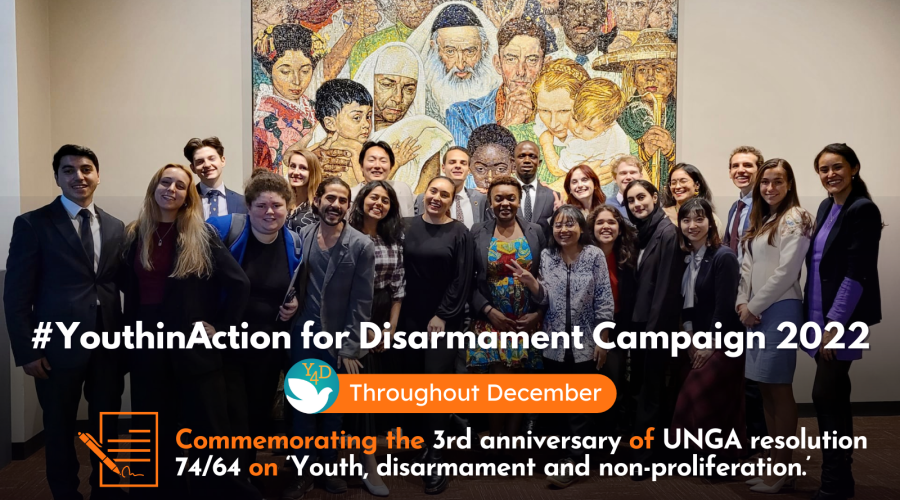 To mark the 3rd anniversary of UN resolution 74/64, the first on Youth, Disarmament and Non-Proliferation, the #Youth4Disarmament initiative has launched the 2022 edition of the #YouthInAction for Disarmament Campaign.

Building on the momentum of last year’s initiative, the 2022 campaign will highlight the projects developed by alumni members of the #Youth4Disarmament initiative to engage, educate and empower young people on topics related to disarmament, non-proliferation, and arms control (D.N.A.).

The #YouthInAction for Disarmament campaign will run throughout the month of December, highlighting the range of projects developed by the young leaders to set youth in action for disarmament.

Be sure to visit the #Youth4Disarmament Instagram to follow the campaign and learn more about the efforts of young people to build a safer, more peaceful world for all.

The UN General Assembly reaffirmed the important and positive contribution that young people can make in sustaining peace and security through its unanimous support of its biennial resolution on "Youth, disarmament and non-proliferation", adopted on 12 December 2019 (UNGA resolution 74/64) and on 6 December 2021 (UNGA resolution 76/45).

The General Assembly resolution encouraged Member States, the United Nations, relevant specialized agencies, and regional and subregional organizations to promote the meaningful and inclusive participation of young people in discussions in the field of disarmament and non-proliferation.