Celebrating Victories and Reflecting on the Work Yet to Be Done: The 2022 Hiroshima-ICAN Academy 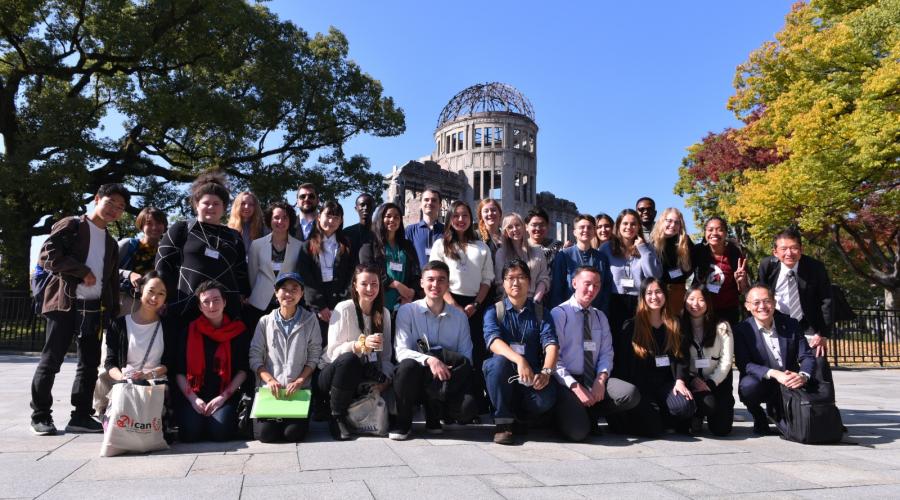 Participants of the 2022 Hiroshima-ICAN Academy in front of the Genbaku Dome.

Over the past three years, I have been introduced to the beautifully challenging world of disarmament. From being selected as a United Nations Youth Champion for Disarmament to becoming a Leader 4 Tomorrow and participating in SIPRI’s 2022 Summer School on Armament and Disarmament, I have grown in my disarmament journey through the knowledge I have gained, the organizations I have connected with, and the people I have met.

Whether in New York, Geneva or Uppsala or on Zoom, each disarmament experience has been meaningful in its own way. Together, they have reaffirmed my passion for understanding how disarmament supports the 2030 Agenda for Sustainable Development, showcasing how disarmament affects real people, and sharing the experiences of atomic bomb survivors, known in Japanese as the Hibakusha.

Above all, every disarmament activity has caused me to visualize Hiroshima and Nagasaki on those two dreadful days, 6 and 9 August 1945. Working with the United Nations Office for Disarmament Affairs (UNODA) and Peace Boat US, I have been able to listen to the testimonials of many Hibakusha. Remembering their stories allows me to wake up in the morning with a rejuvenated passion for this field.

I was originally supposed to travel to Hiroshima and Nagasaki in 2020 as part of the Youth Champions for Disarmament study tour; however, COVID-19 made that portion of the trip impossible. Almost three years later, I found myself in Hiroshima through the 2022 Hiroshima-ICAN Academy, bringing my disarmament journey full circle. The academy provided the perfect ending for 2022, helping me mark the beginning of a new year by recommitting to persevere in our disarmament efforts.

The 2022 Hiroshima-ICAN Academy consisted of online workshops and, for the first time since the beginning of the pandemic, in-person sessions held in Hiroshima. The academy itself is a cooperative effort of the Hiroshima Prefecture and the International Campaign to Abolish Nuclear Weapons (ICAN)—the fruit of a labour of peace.

Our webinars covered topics like the humanitarian and environmental consequences of nuclear weapons, the role of nuclear disarmament in achieving the Sustainable Development Goals (SDGs), the impact of nuclear weapons on the environment, and the financial side of the nuclear weapons industry. There were profound lessons to be learned, both from the lectures and from the assigned readings. Perhaps the most important to me concerned the “downwinders”, a term used to describe individuals in the United States of America who live downwind from where nuclear weapons were once tested. The term is also being introduced to the Marshall Islands, a reminder that entire islands were polluted and made inhabitable not just by historical nuclear tests, but also by exported nuclear waste that was never adequately disposed of.

The sessions also touched upon nuclear energy, covert and overt investments in nuclear research, and the United Nations’ role in achieving nuclear disarmament and the 2030 Agenda for Sustainable Development.

During our in-person visit to Hiroshima, we had the immense privilege of meeting survivors of the atomic bombings, including second- and third-generation survivors (the children and grandchildren of the 1945 survivors). Our senses were heightened as we visited the Peace Memorial Park, where the explosion took place. There, we saw the Genbaku Dome—now a UNESCO World Heritage site—and memorial grounds that hold unidentified remains and honour approximately thirty thousand Koreans who were killed in Hiroshima by the nuclear explosion.

We also explored the Hiroshima Peace Memorial Museum and met with both the mayor of the city and the governor of Hiroshima prefecture. We learned more about the Mayors for Peace initiative, which is bringing together mayors from around the world to work towards nuclear disarmament. Likewise, we met with the Asian Network of Trust – Hiroshima, whose executive director has been working tirelessly alongside volunteers to tell the world about Hiroshima and the dreadful consequences of nuclear weapons. The organization introduces children around the world to story of Sadako and the 1,000 paper cranes, which are called “orizuru” in Japanese.

In Hiroshima, we grew both individually and through our shared experiences. We felt the pain of nuclear weapons—something very hard to fully convey through a screen or live feed. I wondered whether Beirut could “rise from the ashes” like Hiroshima, particularly when it comes to commemorating the non-nuclear explosion that occurred there in 2020. Visiting a school in Hiroshima that was damaged during the atomic bombing, we reflected on our lives and how ordinary, ephemeral activities could suddenly take a tragic twist, separating families and leaving countless individuals wondering what happened to their loved ones.

Most importantly, in Hiroshima, we listened: truly, deeply, and fully, particularly to the strong encouragement of each person we met, to take Hiroshima with us wherever we go and talk to others about our experiences there. As the years continue to pass, and as soaring military budgets continue giving rise to deadlier, more advanced weapons, we remember and commit to a vow from Hiroshima, echoing the words inscribed on the cenotaph at the Peace Memorial Park: “Let all the souls here rest in peace, for we shall not repeat the evil”.