ICAN, you can, we can – abolish nuclear weapons! UN Youth Champions Participate in the Webinar “Path Forward for Nuclear Disarmament” by the Hiroshima-ICAN Academy 2020 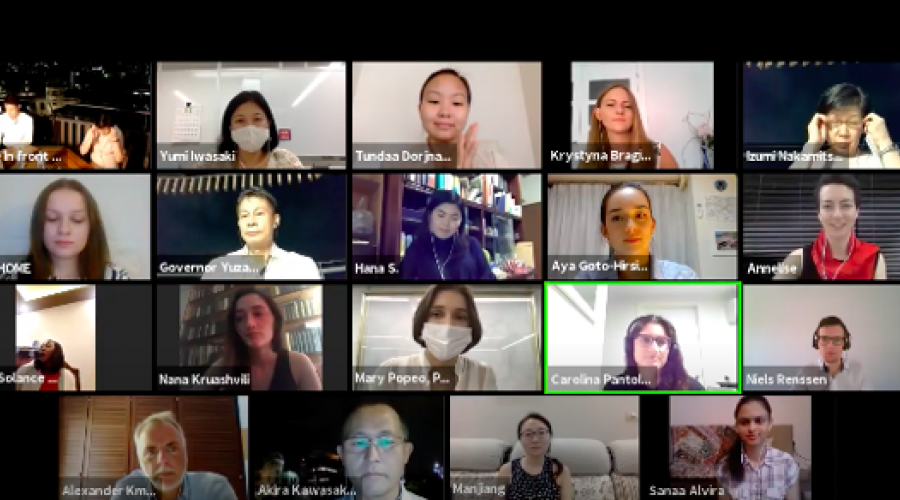 On August 6, 2020, the world commemorated the 75th Hiroshima Day, remembering the victims of the atomic bombing of the city on August 6, 1945. To recognize the 75th anniversary, Hiroshima-ICAN Academy hosted the live webinar, “Path Forward for Nuclear Disarmament”. While open to all interested, UN Youth Champions for Disarmament included, the webinar was originally designed for participants of the Hiroshima-ICAN Academy on Nuclear Weapons and Global Security 2020. The Academy, held jointly by Hiroshima Prefecture and the International Campaign to Abolish Nuclear Weapons (ICAN), aims to train to young people to “make peaceful contributions to the world” – something that we Youth Champions equally strive to achieve!

Eager to hear from ICAN and the Hiroshima-ICAN Academy students, we tuned in from around the world – our North American participant even waking up at 6am – to hear unique perspectives on disarmament and how youth can best honour the Hibakusha (atomic bomb survivors). ICAN’s success in bringing about the Treaty on the Prohibition of Nuclear Weapons (TPNW) adopted by the United Nations in July 2017 speaks to their phenomenal record, as does winning the Nobel Peace Prize later in 2017 for their relentless efforts to eliminate nuclear weapons!

Against the backdrop of the city of Hiroshima, with the iconic Atomic Bomb Dome displayed prominently, the webinar began with a lively discussion on how government and civil society can work together for complete nuclear disarmament. Governor of Hiroshima Yuzaki Hidehiko shared the importance of resourcing expertise from civil society to aid the government, while Beatrice Fihn, Executive Director of ICAN, discussed the necessity of empowering young people to make change in their own communities. Fihn’s approach, which combines bottom-up organization, building relationships, and detailed coordination, is key to engaging local governments in global issues.

Building on Fihn’s notions of government engagement, Austrian diplomat Alexander Kmentt, detailed the importance of human-focused disarmament efforts. According to Kmentt, Austria, a Non-Nuclear Weapons State (NNWS), was forced to get creative with finding new ways to engage on the issue of disarmament without relying on Nuclear Weapons States (NWS). This frustration with the status quo led to unique approaches, such as coalitions of NNWS rallying together to create a world free of nuclear weapons.

Common among all the experts present was a sense of collective responsibility to the Hibakusha and the next generation to rid the world of nuclear weapons. Rather than relying on traditional networks, old ideas, and outdated policies, all in attendance agreed that there is a need for an influx of new ideas. Izumi Nakamitsu, UN Under-Secretary-General and High Representative for Disarmament Affairs focused her suggestions on how to overcome the disarmament impasse on methods of collaboration and innovation. Relying on the TPNW, conversations between the public, civil society, and governments, and approaching the work with a resiliency and hope that we will never see another Hiroshima and Nagasaki is vital. As Fihn so eloquently shared, “Do we know that exactly this thing is going to work? No, we don’t…. We do know that we all have to keep pushing to do everything we can to make our contribution.”

The final moments of the webinar focused on reorienting the conversation of disarmament to focus on a humanitarian lens. While each speaker highlighted this necessary lens, the closing remarks from Hibakusha Koko Kondo best captured the sentiment, “For the sake of this planet, I depend on you.”

Challenged and inspired by the speakers and the historic commemoration of 75 years since Hiroshima Day, we Youth Champions were reinvigorated for the cause of disarmament. A world free of the threat of nuclear weapons is a world that both honours the lives lost 75 years ago and values the futures of upcoming generations.

To those who are fighting the good fight, we thank you.