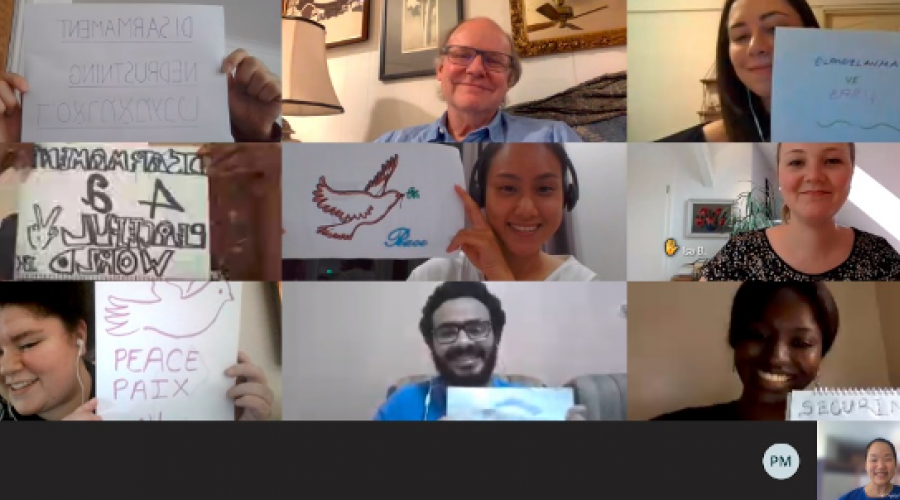 It is not every day that one gets to talk to a retired Senior Political Affairs Officer at the UN who is also the main trumpet in the UN Symphony Orchestra! Therefore, we youth champions were looking forward to the fireside chat with Dr. Randy Rydell. Having spent his professional life engaged in disarmament affairs in academia, think tanks, and government institutions, he was able to provide diverse perspectives and introduce us to some terminological pitfalls young people could find in the field of disarmament. For instance, disarmament, meaning the elimination of agreed classes of weapons, is not the same as arms control, which denotes the regulation of armament in terms of numbers, range, lethality etc.

Equally, Dr. Rydell pointed out interesting trends that made us hopeful: for instance, while predictions from the 1970s supposed that there could one day be dozens of States possessing nuclear weapons, today only nine are thought to have them. Treaties and international agreements on disarmament, non-proliferation and arms control have made the world a safer and more secure place.  Through the education that we Youth Champions receive, thanks to UNODA and the support from the Government of Germany, we hope to contribute to global peace and security in the future, too.

After all, Dr. Rydell really drove the point home that the risks of entering into disarmament treaties such as (cheating, economic cost of implementation, inadequate verification, and break-out countries violating agreements) must be weighed against the unpredictability of a world with no disarmament regime, where indefinite increases in military spending, unlimited testing and development of new weaponry, an expanding of the global proliferation of WMD, the further postponement of needed social and economic development and infrastructure development, regional and global arms races to acquire WMD and their delivery systems, expanded risks of accidental war and growing humanitarian consequences of such wars, regional arms races and accidents in the transport and handling of nuclear weapons could be the norm. According to Dr. Rydell, we must see disarmament not as a constraint on national interests – but as an invaluable tool for peace!

With an estimated number of 1.8 billion youths (ages 10-24) globally, Dr. Rydell placed emphasis on the fact that the world currently has the largest youth population ever recorded in history. In his own words, the youths represent a constituency for disarmament with tremendous potential for progress in achieving this goal. Dr. Rydell encouraged the group of Youth Champions for Disarmament to continue in our efforts to achieve disarmament across the world and also engage other youths in the process. We definitely had a very inspiring and enlightening fireside chat with Dr. Rydell. Ms. Soo Hyun Kim of UNODA did well to provide us with extra time to take all of our questions; this helped increase our understanding of some of the concepts he had earlier spoken of. Our horizon has been broadened after such an informative session and we look forward to the next one with enthusiasm!

This time, we took our group photo with creative symbols to represent disarmament for peace.