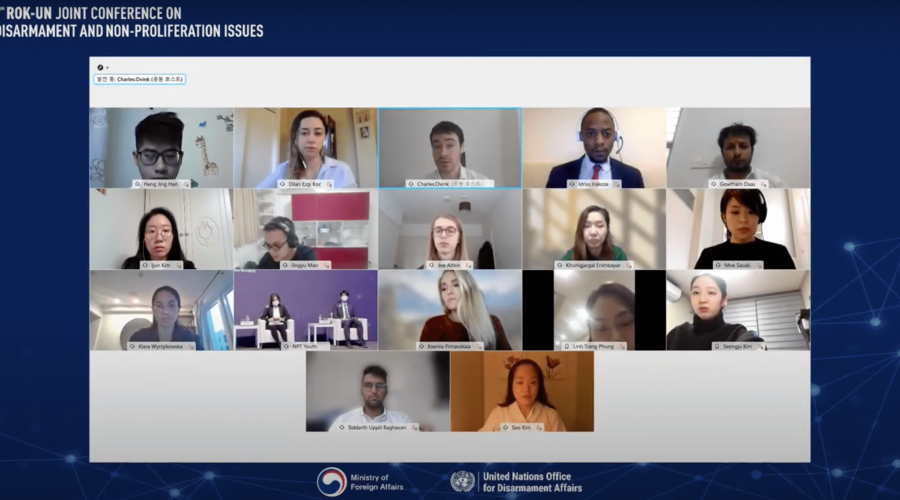 Participants take part in the Youth Special Session pre-event to the 19th ROK-UN Joint Conference on Disarmament and Non-Proliferation Issues.

A flurry of greetings – “Good morning, good afternoon, good evening” –seems to be a new mainstay of the COVID-19 era, as participants in international conferences log on from time zones around the world. This was certainly an appropriate opening for the 19th Republic of Korea-United Nations Joint Conference on Disarmament and Non-Proliferation Issues, which took place from 2 to 4 December. As New Yorkers rose to early alarms to join the meeting at 7 a.m., Europeans were getting ready to tune in over lunch and colleagues in Seoul were watching their clocks tick towards 9 p.m. As for me, located in Melbourne, Australia, staying up for the Conference’s 11 p.m. start was well worth it.

The Conference is an annual event of the Republic of Korea and the United Nations Office for Disarmament Affairs that brings together governments, research institutes and non-governmental organizations. Since its first iteration in 2002, the Conference has developed into an important forum for open and constructive dialogue on issues related to international security, disarmament, non-proliferation and arms control. The 2020 theme, “New Technologies and Their Impact on the Disarmament and Non-Proliferation Regime”, was fitting for the first year that the Conference took place in a virtual format and industry experts were invited to join.

And this year saw another important and exciting first for the Conference – the inclusion of a dedicated Youth Special Session!

Held in response to calls for inclusive and meaningful youth participation by the UN Secretary-General in his Agenda for Disarmament, the UN General Assembly in resolution 74/64 and the UN Security Council in resolution 2250 (2015), the Youth Special Session brought together five incredible and diverse youth representatives, including university students in science, technology, engineering, and mathematics (STEM), advocates for the Treaty on the Non-Proliferation of Nuclear Weapons and the Comprehensive Nuclear-Test-Ban Treaty (CTBT), a member of the Northeast Asia Youth Steering Committee for Disarmament and Non-Proliferation, and a UN Youth Champion for Disarmament. This group tackled tough questions on subjects like how to “build back better” after COVID-19, the opportunities and challenges presented by emerging technologies, and the barriers to young people participating in disarmament efforts. None of these questions had easy answers, and all five speakers demonstrated the creativity, passion and intellect of young people across the globe as they navigated complex and technical topics ranging from lethal autonomous weapons and big data to foreign policy values and jus ad bellum.

Their presentations and discussion underscored how many of the twenty-first century’s most pressing developments are two-sided, with abundant opportunities and challenges. In the case of technological advancement, for example, Idriss Irakoze of the CTBTO Youth Group pointed out how technology can build trust through applications like detecting nuclear tests, and UN Youth Champion for Disarmament Dilan Ezgi Koç noted how technology could provide new entryways for young people to get involved in disarmament work. However, they also reiterated that younger generations must remain vigilant to ensure that technological innovations are socially responsible and to identify unintended consequences that could cause harm. Similarly, the group noted that even as COVID-19 has laid bare many of the faults and vulnerabilities in our societies, it has also presented an opportunity to re-centre human security and “build back better”.

Many of the youth presenters also stressed the need to include a wider range of voices at the disarmament decision-making table. “Disarmament” is often viewed as a field in which only our political leaders can make change – but, as some presenters pointed out, this approach often means that those at the forefront of innovation and knowledge in the private sector are excluded to the detriment of policymaking. Rather, the youth representatives stressed, disarmament and non-proliferation should be part of a more vibrant and active public discourse in which diverse stakeholders – including more young people – are included.

As young people living through turbulent times, contemplating the world’s future can feel overwhelming. But instead of resigning ourselves to tomorrow’s dangers as a “fait accompli”, in the words of one speaker, we can remember what events like this one are showing: we all have something to contribute to disarmament, no matter how big or small.

I can only hope that other international conferences will follow suit in amplifying youth voices and providing dedicated space for young people to meaningfully participate. Judging by the calibre of the presentations, discussion and critical thinking on offer in the Youth Special Session, disarmament and non-proliferation efforts would be all the better for it.

You can watch the Youth Special Session pre-event here via YouTube. 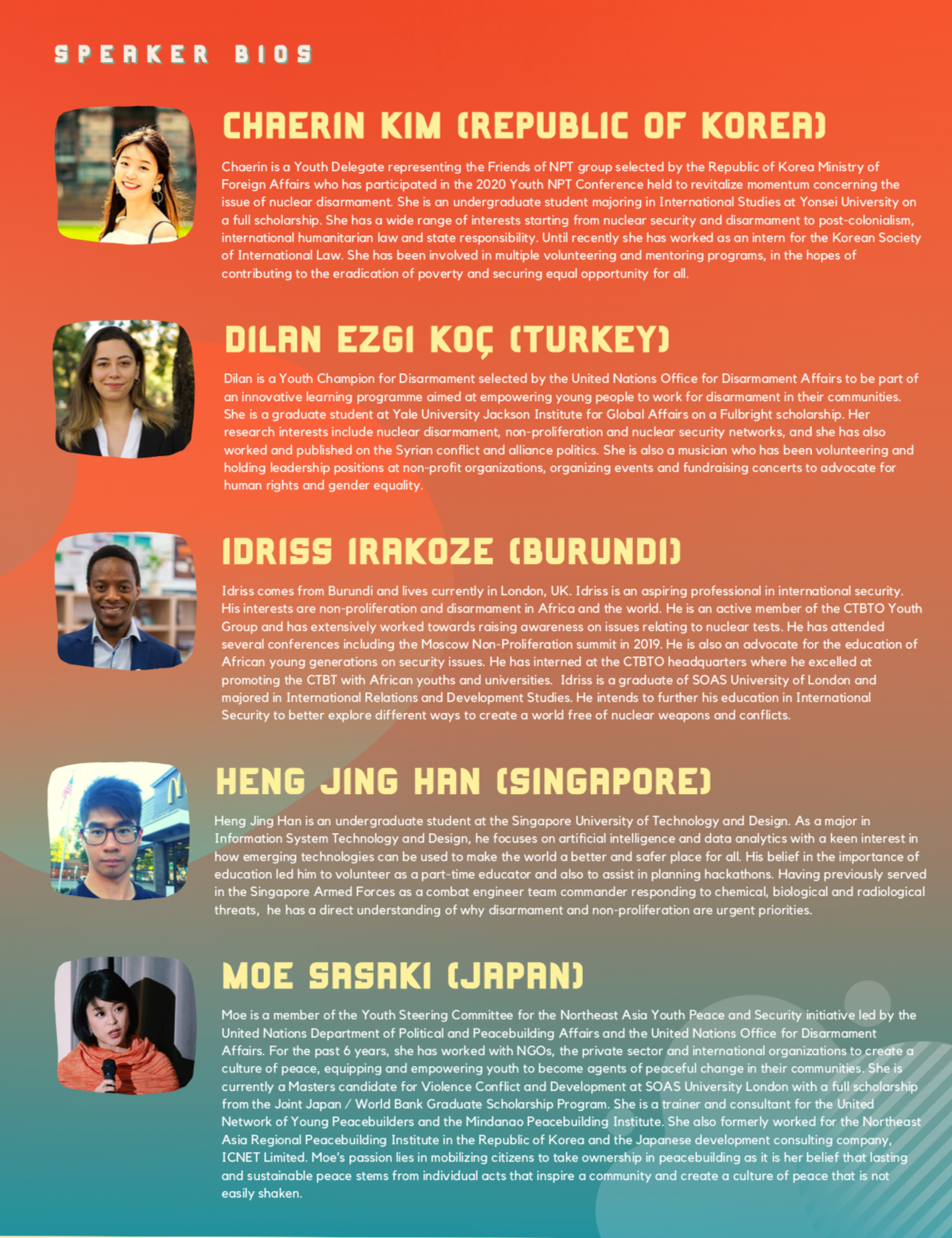