A Woman, a Latin American—and a future Force of Change 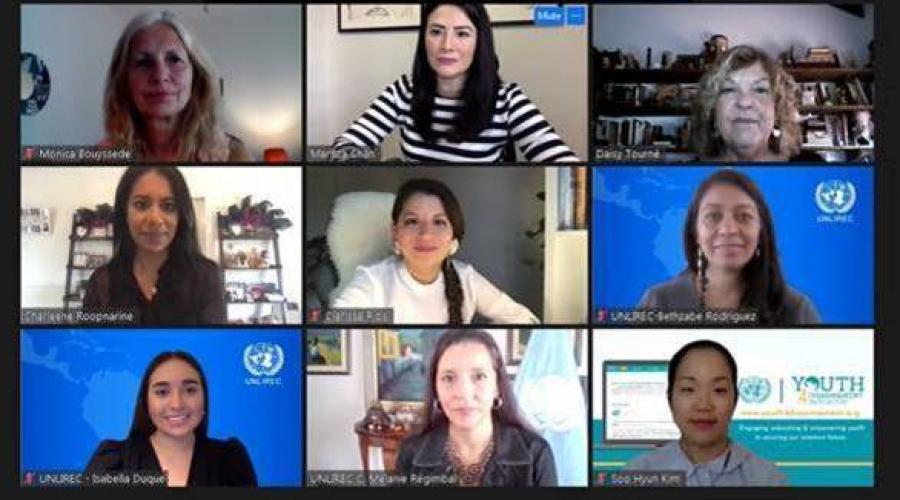 As a Colombian, I grew up in a nation marked by violence and armed conflict. These matters seized my interest from a very young age; learning about them felt vital to understanding my country and the factors that drive conflicts around the world.

In 2016, Colombia signed a historic peace agreement and began a process of laying down arms. Witnessing these developments confirmed my passion for issues of peace, security and disarmament, as well as development in emerging countries. I wanted to get involved and make my own contribution.

But when I moved to France in 2019 to pursue my master’s degree in international relations and diplomacy, I discovered that the competition for opportunities can be fierce. As I applied for internships around the world, I faced questions and concerns not just about my lack of related professional experience, but also about my status as a young Latin American woman.

Enduring multiple rejections helped me to better understand the systemic nature of this challenge. If opportunities in this sector are not being given to young people, especially women, how can we acquire the experience we will need to join it as professionals?

Finally, in a breakthrough for my career, the United Nations Regional Centre for Peace, Disarmament and Development in Latin America and the Caribbean (UNLIREC) opened its doors for me to learn, work and deepen my interest in disarmament, non-proliferation and arms control. As part of the gender team in UNLIREC’s conventional arms control programme, I joined leaders from many paths and backgrounds to work towards goals we shared. With help from my new colleagues, I learned that disarmament can be approached in many ways, including from technical, practical and legal perspectives.

I became involved in two main projects: “Women, Disarmament, Non-Proliferation and Arms Control” and “Combat of Illicit Arms and Ammunition Trafficking in Latin American and the Caribbean”. By conducting research, systematic organization, monitoring news developments and much more, I gained greater appreciation and understanding of disarmament work in this region and the wider world.

I also continued to learn about the Secretary-General’s Agenda for Disarmament and its four pillars: eliminating weapons of mass destruction; promoting controls on conventional arms; addressing challenges from new technologies; and strengthening partnerships for disarmament. Studying the Agenda helped me understand why that disarmament has to be at the heart of global efforts to build peace and stable international relations.

After nine months at UNLIREC, I had the opportunity to help organize two major events.

The first was a launch ceremony for the fourth edition of Forces of Change, a publication highlighting the commitment, challenges and accomplishments of Latin American women working on disarmament, non-proliferation and arms control. Learning about these incredible women was inspiring, and I came away feeling even more motivated to remain in this sector and achieve incredible things. The event also marked the tenth anniversary of UN General Assembly resolution 65/69, where countries recognized that women and men are both essential for attaining sustainable peace and security. Global awareness of this fact is rising, fortunately, but much more work is still necessary for women to participate equally. To this end, we have to continue sending young people the message that gender parity is critical to achieving sustainable peace and security, which we all wish for and deserve. We have to persist

The second event that I supported was a “virtual colloquium” where five women featured in Forces of Change discussed their experiences and shared advice directly with students and other young people. Our aim was to engage young people on disarmament issues because, as the UN General Assembly unanimously stated in resolution 74/64 on “Youth, disarmament and non-proliferation”, youth make an important and positive contribution to promoting and achieving peace.

By finding, promoting and creating more opportunities for young people to learn about and develop an interest in this deeply important area, we as youth can create alliances, raise our voices and become our own “force of change”. In Latin America and other regions facing challenges from firearms, this may mean advocating together for concrete responses that will contribute to progress and development in our communities.

At UNLIREC, I witnessed and learned from people working for disarmament, non-proliferation and arms control all across Latin America. The experience got me even more interested in tackling these matters professionally, but above all, it convinced me that my own work for peace truly makes a difference. And although my internship was entirely virtual due to the pandemic, I got to be part of a historic shift as the organization reinvented itself through virtual courses and other tools. 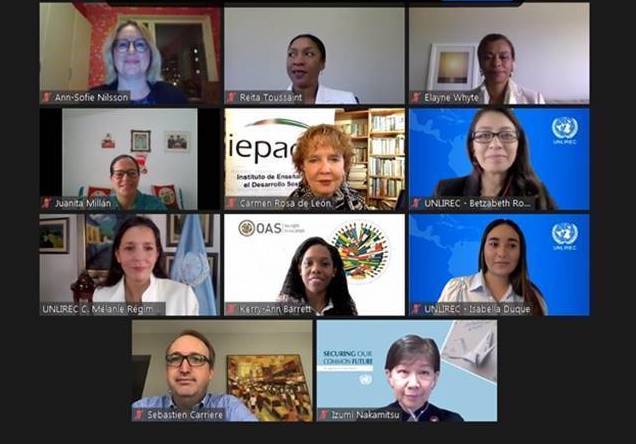 My desire, as a young Latin American woman, is to continue learning about these subjects so I can share my knowledge and inspire peers. As more of us get involved in peace and security work, we can harness our talent and creativity to lead international efforts towards reconciliation and the eradication of armed conflict.

It is therefore with deep hope and sincerity that I invite you, the reader of this message, to be part of this transformation with me.