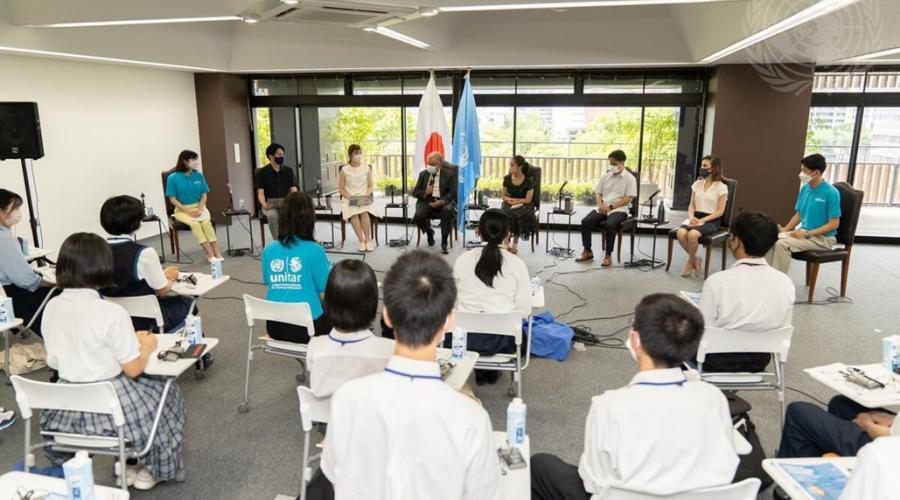 On 6 August 2022, the seventy-seventh anniversary of the atomic bombing of Hiroshima, the UN Secretary-General António Guterres met with youth leaders to hear their innovative ideas and perspectives for advancing nuclear disarmament and non-proliferation.

Six young activists from Japan spoke with the Secretary-General about their experiences working in the field of disarmament, current obstacles for achieving a world free of nuclear weapons and the role of young people as the ultimate force for change.

Ms. Shizuka Kuramitsu, one of the United Nations Office for Disarmament Affairs’ #Leaders4Tomorrow, moderated the youth exchange and expressed the need for global leaders to listen to young people. Ms. Kuramitsu noted that growing engagement with youth "shows that more and more people are becoming aware of the significance in bringing diversity to the discussion table” and her belief that intergenerational dialogue will “lead to a better, and more sustainable future for all." Ms. Kuramitsu also stressed the need to include young people in discussions for advancing the disarmament and non-proliferation agenda. "We are always seen as idealists or dreamers, but these are real ideas that we need to pursue,” she said.

In his remarks, the Secretary-General, apologized to young people on behalf of his generation for the current challenges facing the global community. He highlighted three central issues that youth will have to address as the leaders of tomorrow, including the threats posed by nuclear weapons, climate change and growing inequalities. "I apologize but I encourage you to assume responsibilities, not to wait, and to speak loudly," he said. He also underscored the importance of disarmament for saving humanity, saving people, and safeguarding future generations. “There are no reasons for 13,000 nuclear weapons in the world. Fight for disarmament,” he urged the youth panelists and attendants, joining in-person and online.

A recording of the event is available to access on the #Youth4Disarmament YouTube channel in English and Japanese.