UN Youth Champions for Disarmament experience at The Tenth NPT Review Conference: Youth and the NPT

UN Youth Champions for Disarmament experience at The Tenth NPT Review Conference: Youth and the NPT 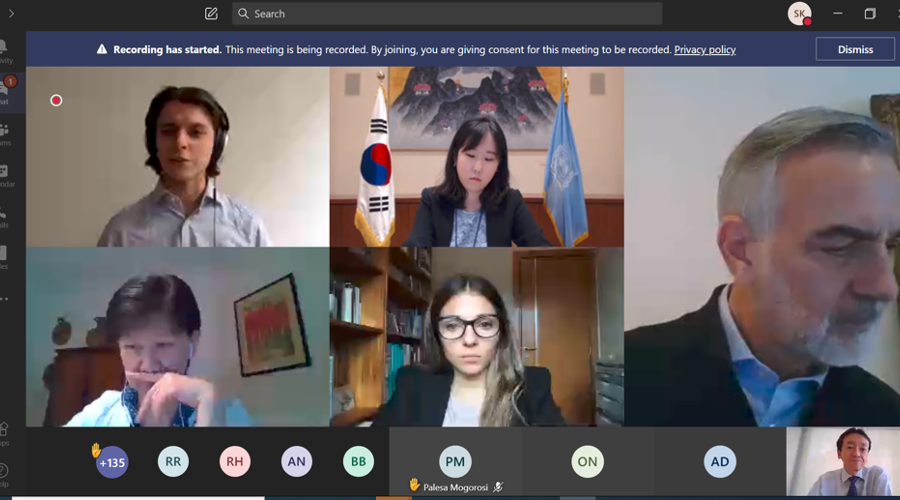 Today, we served as strong witnesses of the amazing work UNODA is doing to engage more youth in disarmament activities. We were really honoured to have been specially recognised and mentioned as the first group of 10 UN Youth Champions for Disarmament by the High Representative for Disarmament Affairs, Ms. Izumi Nakamitsu as she commenced her opening speech at the high level event “The Tenth NPT Review Conference: Youth and the NPT”. This gesture was definitely very encouraging for the entire group to receive such a special welcome at this prestigious event, it also shows that youth are making headway in being part of global decision making with regards to disarmament; this for us is an achievement for the youthful population.

It has been 75 years since the first and only use of atomic weapons, hence today’s meeting was a very significant event for youth around the world which are referred to as future custodians of disarmament. Mr. Sebastian Brixey-Williams, Co-director of BASIC served as the moderator and the 4 panelists at this event were:

Throughout the event, Ms Nakamitsu emphasized the power of youth as leaders of global change. She drew on the need to empower them through diverse networks, platforms, and comprehensive practical learning methods. She also stressed the older generations’ duty to help the youth and to listen to them making mention of the UN Secretary General’s agenda on disarmament “Securing Our Common Future”, where he recognized that young people can act as a tremendous force for change. Ms. Nakamitsu underlined the fact that we are going through a transitional and transformative period marked by movements with young people being at the core of these, working to transform societal structures. As an international organization, she believes that the UN has the role of enabling young people to access knowledge and to build their skills. She believes that nuclear weapon free zones can be further utilized to advance the non-use of these weapons. Moreover, she stressed the need for cross-regional learning. She stated that as the world is currently battling through COVID-19, a window of opportunity has opened up, drawing attention to excessive military expenditures. Ms. Nakamitsu concluded by reiterating that humans are at the center of security, further highlighting the importance of going back to diplomacy, dialogue, and negotiation. Lastly, and in regards to the future, one of the most important next milestone is to focus on the Comprehensive Nuclear-Test-Ban Treaty and on ensuring its entry into force.

For his part, H.E. Ambassador Gustavo Zlauvinen declared that one of the world’s most important issues which we have inherited is that of armaments. Speaking on the NPT, he mentioned how it is regarded as a cornerstone of non-proliferation and a pillar of peace and security, further describing it as one of the most enduring and lasting multilateral treaties in the world. Furthermore, he stated that the treaty today is as necessary as ever due to the expanding dangers of arms, the increasing tensions, and the growing reliance on weapons. Reflecting upon the youth and the need to integrate them in discussions and dialogues, he stressed youth’s need to fight for a place on delegations, to make their voices heard, and to create their own space. He also suggested having a forum dedicated to the “NPT and the next generation” on the margins of the NPT review conference in order to make governments realize the importance of youth inclusion.

When the time came for H.E. Ambassador Cho’s intervention, the South Korean diplomat stressed the efforts of his country’s youth in simulating the NPT Conference. He talked with great joy about the efforts made by the participants to reflect on the interest of each represented State party. He also relayed how they succeeded in adopting outcome documents and how passionate they were in reaching an agreement all whilst thinking through numerous considerations, review mechanisms, and suggesting nuclear disarmament summits. Moreover, Ambassador Cho stressed the importance of this event in building momentum for the success of the 10th NPT review next year. He also emphasized how nuclear weapons are not enhancing security and are not protecting people from pandemics and other risks., He called for common efforts, increased youth engagement and civil society participation and stressed on the diversity that youth can bring to the disarmament discussion and on their role in reaching a better, non-nuclear world. Lastly, he stated that young people should strive to see issues from a global perspective and go beyond national borders; they should uphold the NPT and work to make it move forward.

Speaking last among the panelists, Ms. Bianca Carpinelli drew on her own experience in bringing together youth, professionals, academics, and students from Latin America to have meaningful dialogues and activities around disarmament. She firmly stated that we cannot and must not fail in addressing the complex issues of the new future. That said, she sees that the best way to ensure present and future success is by having youth immersed in these topics and in learning more about them so that they can take meaningful action when they become policymakers and decision makers. Moving forward, Ms. Carpinelli provided insight into her work of empowering youth through designing workshops focused on the next 25 years of the treaty and the outcome documents resulting from it, which contained suggested actions for impact. She spoke about the keys to sustainability: engaging varied actors from different areas and sectors. Last but not least, she emphasized the importance of dialogue, particularly intergenerational dialogue, in order to incorporate new ideas of global solidarity, inclusiveness, and environmental sustainability, as well as to prepare youth for future roles.

The floor was opened for questions, and it was really nice to hear our Youth Champions ask questions and get qualitative answers from the panelists. On Tuesday this week, the UN Security Council adopted Resolution 2535 (2020) on youth, peace and security. On this point, Ms. Nakamitsu rounded up by advising the youths to engage in negotiation tables and make sure our voices are heard in decision making bodies with governments and international organisations. This for us was really inspiring and enlightening; we were really energised to take up more tasks to improve the disarmament agenda through more youth participation.