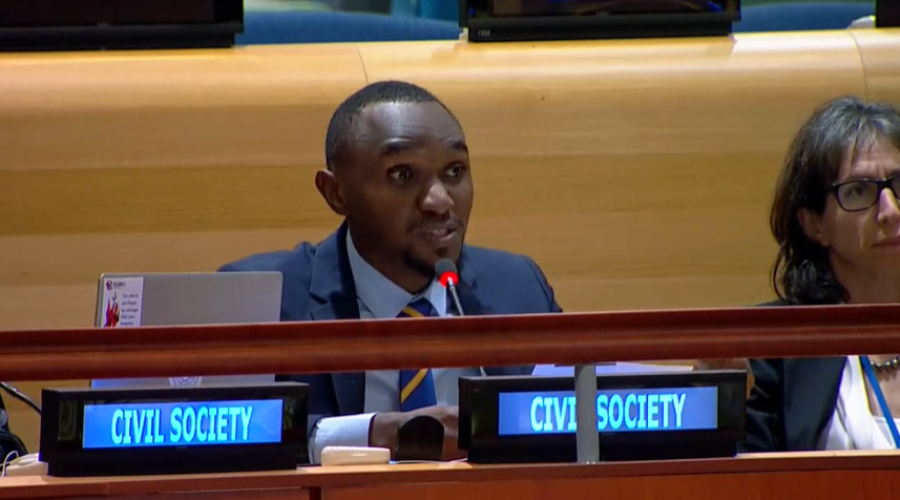 On 26 September 2022, Mr. Patrick Karekezi, UN Youth Champion for Disarmament, delivered remarks during the high-level plenary meeting to commemorate and promote the International Day for the Total Elimination of Nuclear Weapons (IDTENW).

The annual high-level meeting aims to raise awareness about the threat posed to humanity by nuclear weapons and the necessity for their elimination in order to mobilize international efforts towards achieving the common goal of a nuclear-weapon-free world. 75 Member States and 4 observer States delivered statements to the high-level plenary meeting.

Acknowledging the importance of the International Day for the Total Elimination of Nuclear Weapons, Mr. Patrick Karekezi stressed the need to seize the opportunity and mobilize action towards eliminating nuclear weapons. “I am here because I am certain – certain that humanity has the ability to reject fear of each other.”

In his remarks, Mr. Patrick Karekezi outlined the necessity to redirect military spending spent on sustaining and stockpiling nuclear weapons to initiatives aiming to advance our development objectives. “We can invest in our collective future, by funding inclusive education for all, advancing the Sustainable Development Goals for all, and protecting our environment - for everyone.”

Emphasizing that young people are not only the future, Mr. Patrick Karekezi underscored the role of youth as leaders for today.

“Achieving global nuclear disarmament is one of the oldest goals of the United Nations. Let us make it an achievement of the younger generation by embracing a world free of nuclear weapons.”

The UN Secretary-General delivered remarks to the high-level plenary meeting, emphasizing that “eliminating nuclear weapons would be the greatest gift we could bestow on future generations.” “On this important day, let us commit to forging a new consensus around defusing the nuclear threat for good and achieving our shared goal of peace,” he said.

The United Nations General Assembly declared the International Day in December 2013, in its resolution 68/32, aiming to raise public awareness and to encourage deeper engagement with the public on nuclear disarmament matters.

Want to learn more? Visit the dedicated webpage on the International Day for the Total Elimination of Nuclear Weapons.

You can also find out more about the UN Youth Champions for Disarmament programme here. To watch the plenary meeting, visit UN Web TV.