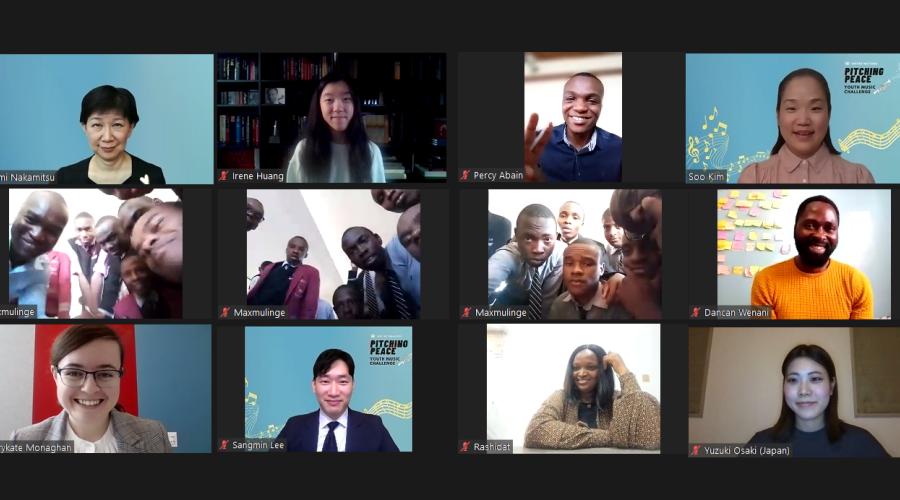 Inspired by the healing and uniting power of music, the United Nations Office for Disarmament Affairs launched the Pitching Peace Youth Music Challenge. Young people aged between 13-29 years old were invited to share their passion for peace by composing and recording their own musical entries.

The challenge was launched on 24 May 2022 to mark the fourth anniversary of the Secretary-General’s Agenda for Disarmament with generous financial support from the Government of the Republic of Korea. Through their submissions, young musicians from around the world used their musical talents to express their perspectives and to motivate others to advance our disarmament objectives.

The finalists selected by the judges were screened by an internal panel of UNODA staff, with geographic diversity and gender parity considered.

The United Nations Office for Disarmament Affairs were pleased to announce the winners during a special, congratulatory event on 14 October 2022. Nine submissions in total were selected as the winning pieces, in the order listed below:

The congratulatory event took place on the margins of the general debate of the United Nations General Assembly’s First Committee, spotlighting the contributions of young musicians in engaging, educating, and empowering others on the importance of disarmament through music. Over 50 virtual participants attended the event.

The three first-place winners delivered remarks on the message behind their winning entries and the power of music to connect with others, both logically and emotionally. Irene Huang, from Canada, provided an overview of the musical techniques in her entry, “Face the Music”, including the negative tones to reflect the harsh realities of conflict and sharp, uplifting notes to present the hopeful future desired. Kelly Lena and Moggie Uruhimae, from the Solomon Islands, noted their use of music to express their perspectives to world leaders and inspire them to act for future generations. Finally, Percy Abainvihdan, from Cameroon, underscored the power to uplift and enact change by engaging people around the world by using music as a universal language of peace.

Speakers included Ms. Izumi Nakamitsu, Under-Secretary-General and High Representative for Disarmament Affairs, Ambassador Mohan Pieris of Sri Lanka, Chair of the First Committee, Mr. Sunghoon Kim, Counsellor of the Permanent Mission of the Republic of Korea to the United Nations and Ms. Dilan E. Koç, UN Youth Champion for Disarmament. In their remarks, the speakers congratulated the winners and highlighted the role of young people as leaders and motivators in advocating for change.

“Music brings people together, nurtures dialogue and creates bridges of respect and understanding. It can create harmony within a world muted by conflict.” – Ms. Izumi Nakamitsu, Under-Secretary-General and High Representative for Disarmament Affairs.

Not able to attend? The congratulatory event is available to watch back on the #Youth4Disarmament’s YouTube channel.

To hear the winning submissions and to meet the prize-winning musicians, visit the #Youth4Disarmament SoundCloud page.

Thank you to all who entered the “Pitching Peace Youth Music Challenge” to share their passion for peace through music, and to all who promoted the challenge on their channels and with their networks.