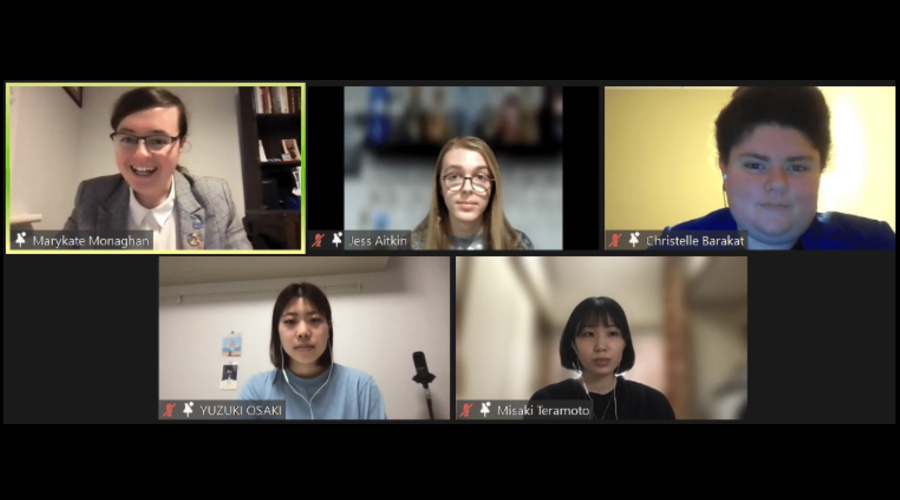 On 30 April 2022, five representatives of the #Youth4Disarmament initiative participated in a panel discussion to highlight how the United Nations is engaging, educating, and empowering young people in building a better and safer future for all.

The panel discussion formed part of the Critical Issues Forum (CIF) 2022 Spring Student Conference, which brought together high school students from Japan, Russia, and the United States of America to discuss topics related to disarmament. CIF is a project organized by the James Martin Center for Nonproliferation Studies (CNS) at the Middlebury Institute of International Studies at Monterey that aims to promote disarmament and non-proliferation education for high school students and teachers around the world.

Over 100 participants attended the conference to explore CIF’s 2022 theme: “Using disarmament and non-proliferation education to empower youth to address global and social challenges”.

Mr. Christopher King, Deputy Chief, Weapons of Mass Destruction Branch (United Nations Office for Disarmament Affairs), delivered the keynote speech on the importance of disarmament to international peace and security. In his remarks, Mr. Christopher King encouraged young people to use their innovation and creativity to enact change.

During the discussion following the keynote speech, the panelists reflected on their experiences with the #Youth4Disarmament initiative and highlighted the different ways in which young people can get involved themselves.

The panel was moderated by Marykate Monaghan, Youth Outreach Consultant (UNODA), and the panelists were:

Jess Aitkin provided an overview of their experiences with the UN Youth Champions for Disarmament programme and highlighted how they had become more confident in engaging with disarmament issues after completing the training. Christelle Barakat reflected on the opportunities provided as part of the programme, such as speaking at multiple events and supporting her fellow Youth Champions’ projects to engage and educate local communities on disarmament issues.

Misaki Teramoto underscored the influence of her professor, who encouraged her and Yuzuki Osaki to enter the “What If - Spesterra” Youth Video Challenge. Reflecting on their winning entry, “Recovery of Damage”, Yuzuki Osaki emphasised how art and music can act as a universal language to engage young people on topics related to disarmament.

All four panelists highlighted the importance of disarmament education and educators in their remarks. The panelists also answered questions on the achievements and challenges they had encountered whilst working within the disarmament field.

Participants also heard a Hibakusha testimonial from Masako Wada, Assistant Secretary General of Nihon Hidankyo, the Japan Confederation of A- and H-Bomb Sufferers Organization. In addition to the presentations, participants also attended two breakaway sessions to exchange their opinions in small groups and take part in an intercultural trivia game.

The #Youth4Disarmament initiative expresses their sincerest thanks to CIF for the opportunity to present their activities during the Spring Student Conference and congratulates all CIF participants for completing their projects!

You can learn more about the Critical Issues Forum here and watch a recording of the Spring Student Conference 2022 here.

Find out more about the UN Youth Champions for Disarmament programme and “What If – Spesterra” Youth Video Challenge.